Abbey Rose was born on October 7, 2014 at 18.27 - five weeks early.
She weighed 4lbs 9oz, with a tiny head, tiny body, tiny everything with some red hair on top to add colour to her pale, fragile body. 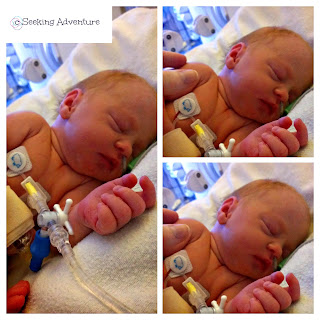 She cried seconds after she was born, dispelling any worry about her lungs.


Abbey was taken to the Special Care Baby Unit to be checked out and was tube fed that night while I recovered from the Emergency Section. 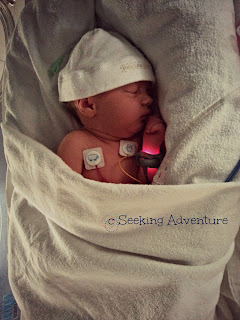 In the middle of the night, she held her breath and set off the alarm on the incubator. She did not have to be resuscitated, but it happened a few times afterwards so the doctors started to treat her for an infection, as they waited for her blood results to be analysed.

They first thought she might have an infection, which was why she was born five weeks early, but that was soon ruled out - she was born so early because she did not have enough room to grow.
Her bloods came back with no infection, so they decided she a form of infant sleep apnea- which is very common in premature babies.

Abbey spent two weeks in SCBU. Suffice to say it was tough - read more about surviving the SCBU here. It was heartbreaking being discharged from hospital, but leaving my baby behind. I thought it would get easier every day I visited, but the more I saw her and held her, the harder it got.

In those two weeks she lost weight and regained it, she was put on caffeine to stimulate her brain, and it worked, the apnea seizures, which only ever happened at night started to become less frequent and then stopped altogether. 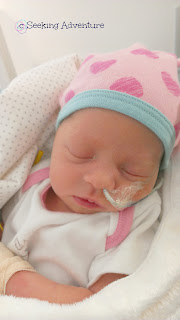 My breastfeeding journey will need a separate post, if not a few, but short story is she was too small and weak to feed from the breast initially, so I pumped milk and she was partly tube fed, partly bottle fed for the first two weeks in hospital.

She was in an incubator for the first 10 days, she had a drip for the first week and was attached to an apnea monitor which meant she had a few wires on her. She was a week old, before she had her first babygrow on - size premature.

She also had issues with her hips, the first few days her heels were up at her head, so it was obvious that they were 'dislocatable.' She was later found to have a dislocated right hip and a shallow/clicking left hip which needed correction. 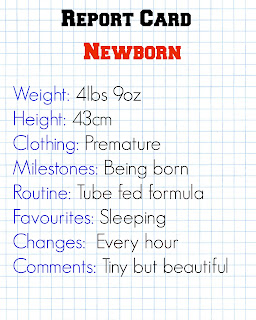 But at two weeks old, she was breastfeeding from the boob, had gained weight and had got over her apnea, we got to bring her home and that was one of the best feelings in the world, as well as overwhelmingly terrifying!