The last leg: The third trimester

I have for a long time battled with the idea of becoming a woman. Not an adult - a woman.
When do we transform from being girls to women - is it turning 18, 21 maybe, finishing college, working full time, making a home, getting married?
I have now decided that before you can become a mother, you must first become a woman.

My definition of a woman has changed as the years go by, but I now think it has nothing to do with being grown up or wise, it is about strength.
A woman is strong mentally and physically, she has experienced ups and downs and knows how to soldier through. A woman knows her priorities, she puts her family first and herself second. She looks at the bigger picture. A woman is determined.
I realised in my third trimester I was not a woman yet, but I had to become one.


Pain
So you might have guessed I found this trimester tough! I was in a lot of pain, mainly with my pelvic girdle pain (or Symphysis Pubis Dysfunction SPD), but also with swollen ankles, tummy upsets and general ‘heavily pregnant’ issues. The physical pain, also brought with it a lot of self pity parties.
From about 32 weeks, the pain did ease in my pelvis. 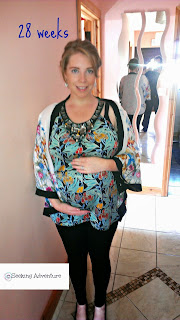 Big baby
So my bump was big, everyone commented on it.
On a trip to the doctor to see if I had a blood cloth in my leg (blame google) he felt my tummy and said that my baby felt very big. When I returned for another check up, he said the baby was so big I would need a c-section. I started reflexology to help ease the pain of my SPD, but quit after spending an evening in floods of tears when the reflexologist asked me if I was having twins and when I said no, told me if I went full term my baby would be 12lbs!! Who tells a first time mother that?! I was scared and so upset, I blamed myself for eating too much and had a complete melt down.
(Spoiler alert: They were wrong!)


Baby shopping
I had started my baby list in the middle of the second trimester, after I was diagnosed with SPD. The threat of crutches and or bed rest played on my mind and the organised person I am wanted to get everything I needed before I was unable to do so. I did pick up the last few bits early in my third trimester. I will do a post on newborn essentials soon. 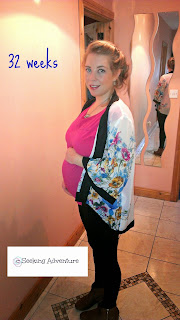 Gender
I really wanted to know if my baby was a boy or girl. I had no preference, but I wanted to know. From our very first scan up to the scan at 35 weeks I asked about gender, but did not get an answer. Our mysterious baby decided early on in the game to not only get into the breech position but also to face towards me, like hugging me, so we could not get a clear picture of the genitals. It was frustrating, but obviously not a big deal.

Movements
Her unique comfy position, as well as my bicornurate uterus resulted in very few baby kicks. I felt the baby every day, but no where near the recommended 10 kicks a day. For some reason (despite google!) I was not worried, I felt the baby every day and just knew everything was ok. But midwives and doctors did not feel the same way, so I had a lot of check ups in my last few weeks.

High blood pressure
At my 34 week hospital appointment, they found my blood pressure very high. The high BP and the small amount of baby movement caused some concern so they kept me overnight to monitor. It was strange staying in hospital for the first time in my 29 years, especially when I felt perfectly fine. They put me on a non-stress test to monitor the baby’s heart rate and checked my blood pressure every three hours. I was discharged the next morning as my BP had come down, but I was sent home to rest and to finish up at work.
Four days later, I had another hospital check up, I was put on the non-stress test for 30 minutes and my blood pressure was monitored, this time my BP was a little low and they said I was a bit dehydrated!
At 35 weeks I was back again for a  hospital appointment, BP was high again but I pleaded to be sent home on bed rest. Hospitals are no fun! I was sent home under strict instructions to report any faintness, dizziness or lack of movement.

Also check out:
The Ultrasound: Baby's first picture
The honeymoon of pregnancy: The Second Trimester
What a pain in the pelvis!
Posted by Unknown at 12:00