Not due yet, but one month old!

Abbey spent half of her first month in hospital, the other half at home - but she really should have spent it in the womb as she wasn’t due out yet!


She had a hectic first month and although looking back it seems to have gone in a flash, I know that to be untrue, the nights were long, very long.

At three weeks old, she shed her still small  premature clothes and became a much larger baby with a whole body harness for her dislocated hips. Just when we thought we knew how to change her nappy, the game changed, she now had to wear two nappies, interwoven around a large square brace. Despite the chore, she seemed comfy and content in the brace.
Now not only was she tiny, but she was also awkward. We couldn't hold her like a newborn cuddled into the crook of our arms, she was either flat down or up on our shoulder. She seemed to like the height, so she spent most of her time perched on our shoulders.


We tried to not hold her all the time, but she developed a hatred for her cosy and warm Moses basket. A calm sleepy baby became erratic one we laid her down in it. After trying tilting the basket, moving it into a dark room, a bright room , swaddling, not swaddling we found the solution.

Our solution is not recommended - by anyone, especially health officials. But the only way we could get her to sleep was to put her lying on her tummy. We have learned since that babies are spoiled in SCBU as they are allowed to sleep on their tummies as nurses are constantly checking them. A SCBU nurse did tell me while we were there that lying a baby on his/her tummy aids digestion.


I was scared when we first tried it, but also relieved. After nervously telling our family, both my mother and my husband’s mum revealed we had slept on our tummies as babies (I still do) and that it was the recommended advice in the 80s.
So we checked on her more often than a sane person should, but she slept soundly, maybe it was the brace, maybe it was genetics - or maybe it was Abbey’s way.

There was no routine at one month, she fed from my breast about 2.5 hours during the day and every 90mins or so at night. Some days were better than others, but it was a sea of exhaustion and newborn cries.


Thankfully we did limit visitors as she had not had any of her vaccinations, so despite the difficulties it did give us a chance to get to know our new family member and she seemed to warm to us!
She is opening her eyes for longer and longer each day, loves being talked to and loves sleeping on her daddy! 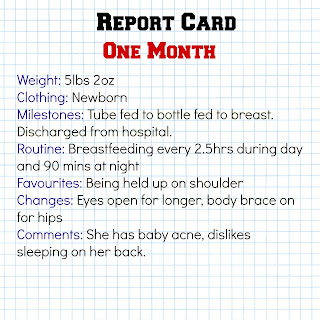 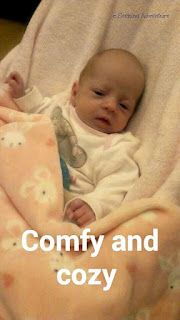